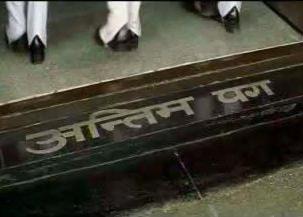 The first batch of 40 Trainees (GC or Gentleman Cadets as called at IMA) began training on October 1, 1932, Brigadier L.P. Collins was the first Commandant. On 10 December 1932, the institute was inaugurated by Field Marshal Chetwode. Field Marshal Sam Manekshaw was one of the Gentlemen who passed in the first batch

Training at IMA is aimed to mold the physical and mental skills and improve the leadership skills of cadets. Training at IMA includes Physical training, drills, weapons training, leadership development, and practices form the focus of the training. Full emphasis is given to sports facilities in the academy, the academy is equipped with courts of outdoor games and indoor games.  North Campus of the Academy has a Polo Ground along the Tons River.

A cadet is expected to follow the following rule in his life, these lines are excerpted from the speech of Field Marshal Chetwode at the inauguration of the academy in 1932

IMA is in the foothills of the Himalayas, the weather around the academy best suits the training purpose to train young mens into dynamic warriors.

Following are the names of some of the notable alumni of IMA. The list is long and is increasing.