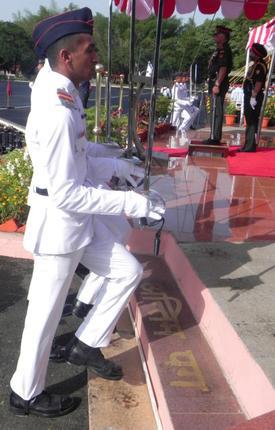 In recognition of the sacrifices of Indian troops in the liberation of Sudan, The then Governor General of India received a hundred thousand pounds from Sudanese Government but due to the partition of India, India’s share was 70,000 pounds and 30,000 pounds were given to Pakistan. Later Indian Army decided to use these gifted funds to partly cover the construction cost of the NDA. The foundation stone was laid by the then Prime Minister of India, Pandit Jawaharlal Nehru on 6 October 1949. The Academy was formally commissioned on 7 December 1954, and on 16 January 1955 inauguration ceremony held and thereafter the Joint Service Wing program was transferred to the NDA.

NDA has an excellent facilities for overall development of cadets and wide range of facilities include spacious and well maintained classrooms, well managed laboratory, 2 Olympic size swimming pools, a Gymnasium, 2 polo grounds, 32 football grounds, a cricket stadium and a number of squash and tennis courts.

Academic year at NDA is divided in 2 terms. The first is Spring Term which extends form January to May and second one is Autumn Term extending for July to December. A cadet undergoes six terms before he crosses the Antim Pag of NDA.

All cadets joining the academy are awarded graduation in B.A/B.Sc. or B. Sc. (Computer Science) degree from Jawaharlal Nehru University

Cadets at NDA enjoy a very disciplined life, they follow very tough discipline code which are required to make them dynamic leaders of tomorrow who can lead from the front. The life of NDA cadet is full of exciting and adventurous activities which includes horse riding, river rafting and adventure sports. Cadets can play games of their choice in the academy.

The campus of the Academy is in about 7,015 acres of area and is located about 17 km south-west of Pune city and north-west of Khadakwasla Lake. Sudan Block is the administrative headquarters of the academy