Snake Race or mostly known as Group Obstacle Race (GOR) is one of the interesting but painful tasks in SSB Interviews, it is interesting because you have to cheer a lot and you will enjoy as you will compete with other groups and painful because you would be one of the lucky persons who escaped uninjured from that race. Do not bother about the injury as generally, it will be some scratch on your knees or elbows however at times this task results in serious injury also, but your aim should be to perform well in the race rather than thinking about those injuries.

Your Group has to decide a War Cry (a slogan) which you have to continuously shout to cheer your group.

Till now you have been working within your group but in this task which is known as GOR, you will be having a competition with the other groups. This task consist of 6 obstacles, each obstacle is divided into 4 channels, you will be told which channel to follow throughout in this task. Your group have to also carry a load the load is in form of a rolled-up tent and since it looks like a snake the task is also known as snake race, The group rule, colour rule and rule of infinity are applicable to this task, however, the distance rule is modified in a sense that the candidates are permitted to Jump more than 4 feet.

How to perform well in Snake Race 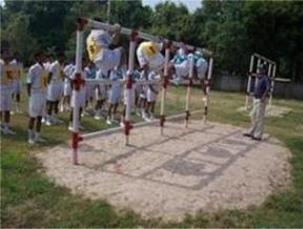 In case if you broke any of the above-mentioned rules or any colour rule then two types of penalties will be given to the group.

Get all the latest information about SSB Interviews. Know all details about Screening, GTO, Interview, Conference, Psychology and Medical.
Previous Progressive Group Task
Next How to perform well in Snake Race

GTO’s Briefing for Half Group Task

The GTO i.e. Group Testing Officer during the SSB Interview will give you certain instructions …