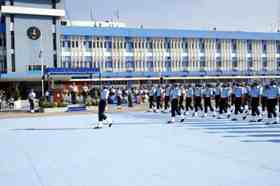 The Foundation stone of Air Force Academy was laid by the then President of India Dr. Zakir Hussain, on 11 October 1967. With a vision to train officer of the IAF under one roof. Since the academy started in 1971, the academy has built a unique and formidable reputation as one of the best training institution of the IAF.

Air Force Academy provides training to young and dynamic men and women and makes them as leaders who can fulfill their duty responsibly. AFA is well equipped to impart training to cadets for Flying, Technical and Ground duty branches of IAF. Various Officers of India’s foreign friend countries are also trained at the academy. The Academy is also capable of training Officer for Air Traffic Control (ATC). Apart from training service code of conduct, etiquette is also taught which are an integral part of our elite Defence Forces.

Young Men and Women at the Academy are provided with a modern start of art, Academy has given huge importance to games and sports.

The academy is spread over 7,000 acres of land in Dundigal which is about 25 Kms far from twin cities of Secunderabad and Hyderabad.

History In recognition of the sacrifices of Indian troops in the liberation of Sudan, The …