UPSC is providing you an exciting opportunity to join prestigious National Defence Academy through NDA (I) 2018 Exam. On 15th January 2018 the UPSC (Union Public Service Commission) has announced notification for NDA I 2018 exam which will be conducted by the Commission on 22/04/2018. The Notification is for the commission in Indian Defence forces viz. Army, Navy and Air Force. Training will commence on 02 January 2019 for 141 NDA Course at NDA (National Defence Academy), Pune and 103 courses at INA (Indian Naval Academy) Ezhimala. The duration of training is of 3 years at NDA and 1 year at IMA, AFA or INA which means a candidate has to undergo 4 years of training before being commissioned into Army/Navy/Air Force. The Summary of the Notification is as follows:-

This year a total of 415 vacancies are announced. Out of which 208 are for Army, 92 for Air Force, 60 for Navy and 55 vacancies are reserved for Indian Naval Academy under 10+2 cadet entry scheme.

First of all, go to upsconline.nic.in

Click on Part I registration and carefully fill the First Part and submit your form.

Now Click on Part II registration which includes payment also. You can make payment of Rs.100 by Credit Card, Debit Card or through Bank Challan.

Successful acceptance of your application depends on confirmation of Payment by the Bank.

What After Clearing Written Exam

Get all the latest information about SSB Interviews. Know all details about Screening, GTO, Interview, Conference, Psychology and Medical.
Previous Nearest Tube Station to Wembley Stadium London
Next Scholarships available for Cadets at the National Defence Academy 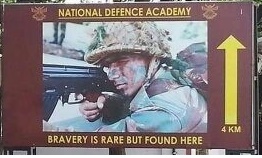